HomeNewsIndian Home Minister says I am in favor of uniforms instead of...
News 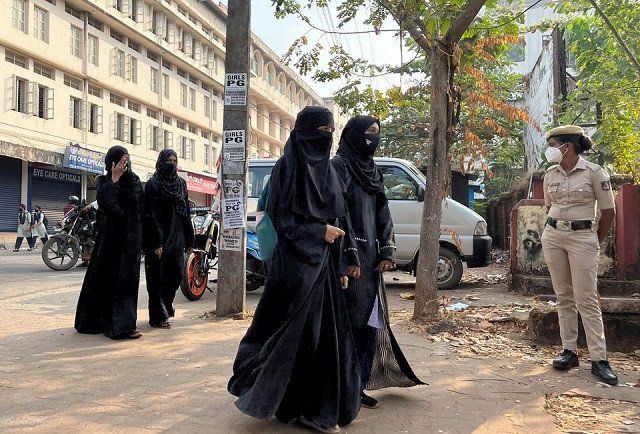 India’s federal home minister has said he is in favor of students wearing uniforms instead of religious uniforms at school.
According to Reuters, Indian Home Minister Amit Shah said that his stance on wearing hijab could change after the court decision.
Earlier this month, a series of protests erupted in the Indian state of Karnataka in response to a ban on female students wearing the hijab in schools, after which the government had to close schools.
The minister said in an interview with the Indian media group Network 18 that he would accept the court’s decision on the issue of the hijab.
“It’s my personal opinion that people of all faiths should accept the school’s dress code.”
Ultimately, we have to decide whether to run the country according to the constitution or aspirations, he added. My personal opinion can only stand until the court decides. And once the court has given its verdict, then I must accept it and everyone must accept it. ”
A case regarding the ban on hijab is pending in the Karnataka High Court. On Monday, the Advocate General will present his arguments in favor of the ban.
India’s population of 1.35 billion is made up of 13% Muslims who have spoken out against the ban on wearing hijab.
Protests in Karnataka have sparked protests in other states, while the United States and the OIC have also criticized the Indian government’s decision.
A case was also registered against 10 female students protesting against the ban on hijab in Karnataka on Sunday.
According to the Indian News Agency ANI, a case was registered against the students for protesting in front of a girls’ college in Tamkru, Karnataka.
In order to control the tense situation created by the protests, section 144 was enforced in various districts under which protests are prohibited.

After Karnataka, the religious dress was also banned in Aligarh educational institution

After the Indian state of Karnataka, a college in the Aligarh district of Uttar Pradesh has also banned students from wearing religious attire.
According to Indian News Agency ANI, students of DS College in Aligarh have been banned from wearing hijab or saffron mufflers.
College principal Dr. Raj Kumar Verma said We will not allow students to enter the campus with their faces covered.
“Students are not allowed to wear hijab or saffron muffler within the college premises.”
For the past several weeks, students in the Indian state of Karnataka have been protesting against the ban on wearing hijab in educational institutions. In Karnataka, on the other hand, the ruling Bharatiya Janata Party (BJP) government and other left-wing parties are in favor of the ban.
Students of Aligarh Muslim University also staged protest rallies after the ban on hijab was imposed in Karnataka.
We were forced to protest because a girl protesting in Karnataka was harassed by the vandals, the protesters said.
A statement issued by the protesters said, “We salute the brave girls of Karnataka.”
A case of the ban on hijab in Karnataka is pending in the High Court and students have been banned from wearing religious attire till the case is decided.